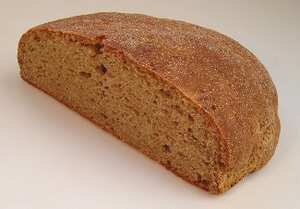 Potato bread is a form of bread in which potato replaces a portion of the regular wheat flour. It is cooked in a variety of methods, including by baking it on a hot griddle or pan, or in an oven. It may be leavened or unleavened, and may have a variety of other ingredients baked into it. The ratio of potato to wheat flour varies significantly from recipe to recipe, with some recipes having a majority of potato, and others having a majority of wheat flour.

Kartoffelbrot is a potato bread that may contain spelt and rye flour.

Pratie Oaten uses a fine oatmeal instead of flour for more texture.

Apple Potato bread is a speciality of Armagh, which is famous for growing apples. It is a potato bread wrapped, pasty-like, around a sweet filling of apples.

Papa-pan: A recent spike in wheat prices has led to an increased use of potatoes in Peru. "Potato bread is being given to school children, prisoners and the military, in the hope the trend will catch on."

Okrągły chleb kartoflany is a light and airy potato bread.

Commercial Product: potato bread is commercially available in the United States as a light and airy bread very similar to normal mass produced white bread, but with a yellow tint, and a light potato flavour.

Cherokee Sweet Potato Bread is a variation on potato bread that uses sweet potatoes in lieu of actual potatoes.