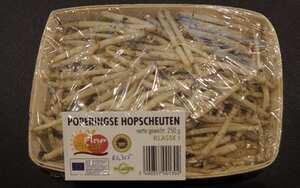 Specific steps in production that must take place in the defined geographical area:

The protected geographical indication ‘Poperingse hopscheuten’/‘Poperingse hoppescheuten’ is based on reputation and on the tradition of producing this product in the Poperinge region.

Farmers grow and harvest hop shoots in two ways. There is the ancient, traditional method of growing hop shoots outdoors — a production process used to this day in all hop-growing regions, including Poperinge. However, in 1983, hop shoots were grown in a heated greenhouse as part of a scientific study. This exclusive second growing method is used only in the Poperinge region, where one third of ‘Poperingse hopscheuten’/‘Poperingse hoppescheuten’ are grown in heated greenhouses, two thirds outdoors. The combination of both cultivation systems is specific to the geographical area. As the harvesting of ‘Poperingse hopscheuten’/‘Poperingse hoppescheuten’ is very labour-intensive and must be carried out with great care and attention in order to avoid damaging the fragile hop shoots, growers have the requisite high degree of knowledge and skill.

1983 saw the establishment of the Keurbroederschap De Witte Ranke (‘Fraternity of the White Hop Vine’), named after a variety of hops that was common at the time. The purpose of the Fraternity was and still is to promote the interests of the Westhoek in general and of the Poperinge region and its ‘Poperingse hopscheuten’/‘Poperingse hoppescheuten’ in particular.

Causal link between the geographical area and a specific quality, the reputation or other characteristic of the product:

Hops were an important crop in beer-brewing Belgium. In the Middle Ages, beer was a popular alternative to water, which was less pure. From the 13th century, hops were used in breweries and replaced the secret mixtures of bitter and aromatic herbs (the ‘gruut’). The crop was brought to Poperinge to replace the cloth industry. The story goes that in the 15th century John the Fearless encouraged the people of Poperinge, who had lost their right to produce cloth, to grow hops. The soil structure and climate make the Poperinge region the ideal place to grow hops. In this way, the region around Poperinge, along with Asse-Aalst, became the hops barn of Europe.

One of the crucial steps in the growing of hops is the removal of the excess shoots. Two or three shoots are kept on each plant. These grow into new vines on which the hop cones can grow. Thus, although hop shoots were primarily a by-product of hop growing, they were a welcome delicacy in early spring, when fresh vegetables were still scarce.

References to the use of ‘Poperingse hopscheuten’/‘Poperingse hoppescheuten’ as a fresh vegetable can be traced back to the 16th century, when the shoots were even believed to have medicinal qualities. Thus, in 1554, Dr Rembert Dodoens wrote that ‘the shoots of hops are used in food and serve to enhance flavour’. Dodoens also believed that ‘Poperingse hopscheuten’ had medicinal qualities. ‘Strength and vitality’. The shoots or young sprouts of hops are used in food. Although they serve more to enhance flavour than to provide bodily sustenance — for they have very little nutritional value — they have a beneficial effect on the bowels, as they facilitate urination and defecation and fortify the stomach.

In 1581, Matthias de Lobel (25), a physician and expert on herbs, published his Krudtboeck (Herb Book) in which he refers to the custom of eating root shoots as a type of vegetable: ‘The young shoots, which do not appear until the end of March or early April, of both wild and cultivated hops are eaten by commoners instead of salad. They have a delightful, chicory-like taste and are fairly warm.’