Purslane may refer to the following succulent flowering plants, commonly used as vegetables. 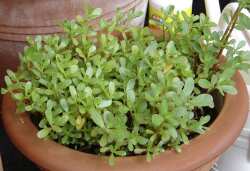 Common purslane (Portulaca oleracea, verdolaga, pigweed, little Hogweed or pusley) is an annual succulent in the family Portulacaceae, which can reach 40 cm in height. About 40 varieties are currently cultivated. It has an extensive old-world distribution extending from North Africa through the Middle East and the Indian Subcontinent to Malaysia and Australasia.

Although purslane is can be considered a weed in some places, it can be eaten as a leaf vegetable. It has a slightly sour and salty taste and is eaten throughout much of Europe, Asia and Mexico. The stems, leaves and flower buds are all good to eat. Purslane can be used fresh as a salad, stir fried, or cooked like spinach, and because of its mucilaginous quality it is also suitable for soups and stews.

Purslane contains more Omega-3 fatty acids (alpha-linolenic acid in particular) than any other leafy vegetable plant. Simopoulos states that Purslane has .01 mg/g of EPA. This is an extraordinary amount of EPA for land based vegetable sources. EPA is an Omega-3 fatty acid normally found mostly in fish, some algae and flax seeds. It also contains vitamins (mainly vitamin A, vitamin C, and some vitamin B and carotenoids), as well as dietary minerals. 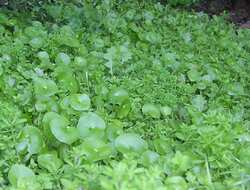 Winter Purslane (Claytonia perfoliata, Miner's lettuce, Spring Beauty or Indian lettuce) is a fleshy annual plant native to the western mountain and coastal regions of North America from southernmost Alaska and central British Columbia south to Central America, but most common in California in the Sacramento and northern San Joaquin valleys.

The common name Miner's lettuce refers its use by California gold rush miners who ate it to get their vitamin C to prevent scurvy. It can be eaten as a leaf vegetable. Most commonly it is eaten raw in salads, but it is not quite as delicate as other lettuce. Sometimes it is boiled like spinach, which it resembles in taste.

It is widely naturalised in western Europe, where it was introduced in 1749. 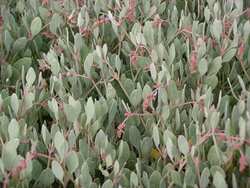 Sea purslane (Halimione portulacoides) is a small greyish-green shrub widely distributed in temperate Eurasia and parts of Africa. A halophyte, it is found in saltmarshes and coastal dunes, and is usually flooded at high tide.

The plant grows to 75 cm. It is evergreen, and in northern temperate climates it flowers from July to September. The flowers are monoecious and are pollinated by wind.

The edible leaves can be eaten raw in salads or cooked. They are thick and succulent with a good crunchy texture and a natural saltiness.