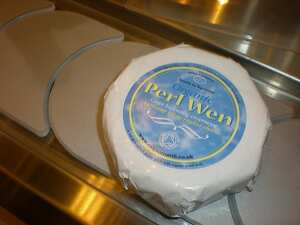 Perl Wen is an organic cows’ milk cheese which has been produced since 2000 by Caws Cenarth in West Wales.

A combination of a Caerphilly and Brie style cheese when consumed young, it can be eaten at any age. It has a soft bloomy rind and a lemony interior. As it matures, it becomes paler with a brown tinge and develops a richer flavour. It won a Silver Award for Best New Cheese at the World Cheese Awards in 2000.

A richer version of the cheese was developed in 2006 called Cenarth Brie. It is very creamy with a fat content of 60%.

If the Perl Wen cheese is not listed below, select a similar type of cheese from the list below to get a rough idea for the number of calories in Perl Wen cheese.