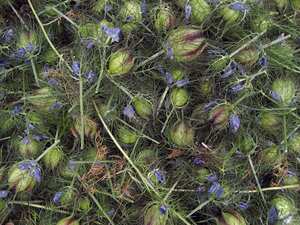 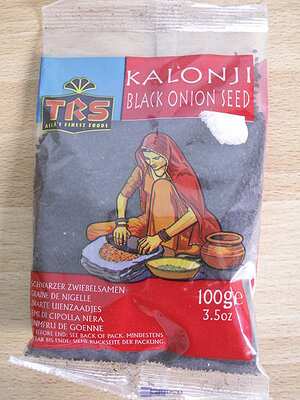 Nigella is a genus of about 14 species of annual plants in the family Ranunculaceae, native to southern Europe, north Africa and southwest Asia. Common names applied to members of this genus are Devil-in-a-bush, Love in a mist or Love in the mist.

The scientific name is a derivative of Latin niger (black). In English, Nigella sativa seed is variously called fennel flower, nutmeg flower, Roman coriander, blackseed or black caraway. Other names used, sometimes misleadingly, are onion seed and black sesame, both of which are similar looking, but unrelated.

The seeds are frequently referred to as black cumin (as in Assamese: kaljeera or kolajeera or Bengali kalo jeeray).

The seeds of Nigella sativa, known as kalonji, black cumin (though this can also refer to Bunium persicum) black onion seed or just nigella, are used as a spice in Indian and Middle Eastern cuisine. The dry roasted nigella seeds flavour curries, vegetables and pulses. The black seeds taste like oregano and have a bitterness to them like mustard-seeds. From my herb 'bible', the excellent "Herbs" - Roger Phillips & Nicky Foy (ISBN 978-0330307253), which I am inclined to trust:

"[Nigella damascena - Medicinal herbs section] The seeds of this plant and a similar species have a strong aromatic odour and a spicy taste and are used as a condiment or spice to flavour cakes, breads and curries. In India they also put them amongst clothes and bed-linen to repel moths ans Indian doctors consider the seeds to be a stimulant, an aid to menstruation and milk flow in nursing mothers. They are also used medicinally to relieve digestive upsets and bowel complaints."

I have seen uncited web references to damascena being toxic, but all references that cited sources referred to the seeds as edible. I would think it fine to use seeds from Nigella damascena in moderation, but if you use this herb in large quantities, buy commercially produced Nigella sativa seeds.