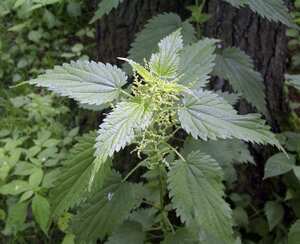 The leaves and stems are very hairy with non-stinging hairs and also bear many stinging hairs (trichomes), whose tips come off when touched, transforming the hair into a needle that will inject several chemicals: acetylcholine, histamine, 5-HT or serotonin, and possibly formic acid. This mixture of chemical compounds cause a sting or paresthesia from which the species derives its common name, as well as the colloquial names burn nettle, burn weed, burn hazel.

Stinging Nettle has a flavour similar to spinach when cooked and can be substituted for other green vegetables in recipes. It is rich in vitamins A, C, D, iron, potassium, manganese, and calcium. Young plants were harvested by Native Americans and used as a cooked plant in spring when other food plants were scarce. A soup made from the young shoots is considered a spring delicacy in Scandinavia. Cooking or drying completely neutralizes the toxic components found in this plant. Stinging Nettle should not be consumed after it enters its flowering and seed setting stages, as the leaves develop gritty particles called "cystoliths" which can irritate the urinary tract.

Soaking nettles in water will remove the stinging chemicals from the plant, which allows them to be handled and eaten without incidence of stinging. Young leaves generally have a better taste than older, more bitter leaves.

Nettles can be used in a variety of recipes, such as polenta and pesto. Nettle soup (or Nässelsoppa in Swedish) is a common use of the plant, particularly in Northern Europe.

The high protein content of nettles makes them nutritionally valuable for vegetarians.