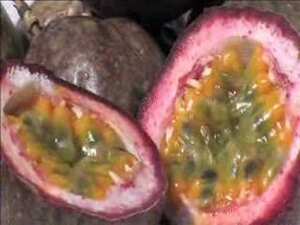 Geographical area: Island of S. Miguel, in the Azores archipelago.

Method of production: This fruit is cultivated in light, fertile, well drained soil, protected from the wind by the island of S. Miguel. Passion fruit is grown from seed. The seeds are collected directly from the mature fruit and then dried in the dark and stored in a dry place. The seeds are germinated in a special tray called in tabuleiros which is filled with sand from the island's beaches. These tabuleiros with their seeds are placed in estufas, greenhouses, in the month of December. The seeds start germinating after about 30 days. They are transplanted when they have grown two leaves and the plants have reached 6-7 cm in height. They are then put in vases of 10-12 cm in diameter with a hole in the base for drainage and filled with compost. Fifteen days before the plants are ready to be planted in the earth, the windows of the green houses are opened to acclimatise the seedlings to the natural weather conditions. The fruits are gathered exclusively by hand from December to March and July to October. The plants are replaced every three years.

Link: The organoleptic characteristics are proven to be due to the edaphological-climatic conditions of the region and to the traditional growing techniques.

Gastronomy: DOP Maracujá dos Açores/S. Miguel passion fruit, because of its thick skin can be stored for a reasonable length of time either in or out of the fridge. Apart from being eaten fresh as a table fruit DOP Maracujá dos Açores/S. Miguel is used as an ingredient in desserts, fruit juices and liqueurs, such as Licor de Maracuja which is made at home by the inhabitants of the island.