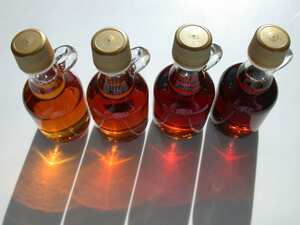 Acer is a genus of trees or shrubs commonly known as Maple. Maples are variously classified in a family of their own, the Aceraceae, or (together with the Hippocastanaceae) included in the family Sapindaceae. Maple syrup is a sweetener made from the sap of maple trees. In Canada and the United States it is most often eaten with waffles and pancakes. It is sometimes used as an ingredient in baking, the making of candy, preparing desserts, or as a sugar source and flavouring agent in making beer. Sucrose is the most prevalent sugar in maple syrup.