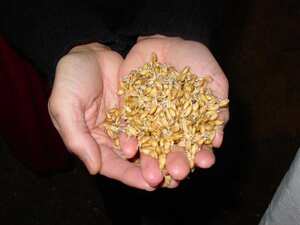 Malting is a process applied to cereal grains, in which the grains are made to germinate by soaking in water and are then quickly halted from germinating further by drying/heating with hot air. Malting is thus a combination of two processes; notably the sprouting process and the kiln drying process. These latter terms are often preferred when referring to the field of brewing for batches of beer or other beverages as they provide more in-depth information.

The term "malt" refers to several products of the process:

Whisky or beer can also be called malt.

Malted grain is used to make beer, whisky, malted shakes, and malt vinegar. Malting grains develops the enzymes that are required to modify the grain's starches into sugars, including monosaccharides (glucose, fructose, etc.) and disaccharides (sucrose, etc.). It also develops other enzymes, such as proteases which break down the proteins in the grain into forms which can be utilised by yeast. Barley is the most commonly malted grain in part because of its high diastatic power or enzyme content. Also very important is the retention of the grain's husk even after threshing, unlike the bare seeds of threshed wheat or rye. This protects the growing acrospire (developing plant embryo) from damage during malting, which can easily lead to mold growth. It also allows the mash of converted grain to create a filter bed during sparging. 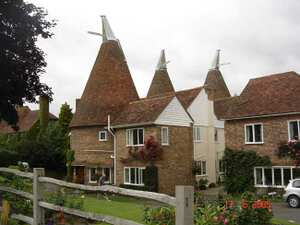 A malting, sometimes called maltings, malthouse, oast house or malting floor, is a building that houses the process of converting barley into malt, for use in the brewing or distilling process. This is done drying the sprouted barley in kilns. This is usually done by spreading the sprouted barley on a perforated wooden floor. Smoke, coming from an oasting fireplace (via smoke channels) is then used to heat the wooden floor (and thus, the sprouted grain with it). The temperature thus employed is usually around 55° Celsius. A typical floor maltings is a long, single-story building with a floor that slopes slightly from one end of the building to the other. There are a number of maltings buildings still in existence, and a handful are still operational. Floor maltings began to be phased out from the 1940s in favour of pneumatic plants. Here large industrial fans are used to blow air through the germinating grain beds and to pass hot air through the malt being kilned. Like floor maltings these pneumatic plants are batch processes but of considerably greater size, typically 100 tonne batches compared with 20 tonne batches for a floor maltings.