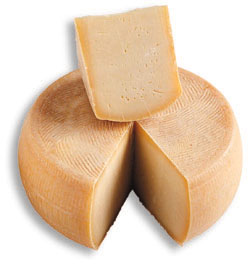 Maiorchino is very popular and sought after in Sicily. According to accounts of Sicilian folk culture it has made its appearance around the 600 at the 'Sagra della maiorchina' (Festival of the Majorcan). Traditional production techniques have been discussed comprehensively in the 1933 book by Carmelo Campisi Pecore e pecorino della Sicilia (Sheep and sheeps' cheese of Sicily). It is a cooked, hard, ewes' milk cheese from the municipalities of Saint Lucia del Mela, Novara di Sicilia, Basicò, Tripura, Mazzarrà Sant'Andrea, Fondachelli, Montalbano Elicona on the north side of Peloritani.

It is still produced using ancient techniques. The milk coagulates at 39°C with the aid of lamb and/or kid rennet paste. After the cutting of the curd it is heated up to about 60°C. Good cheesemakers manage to collect the curds by hand into a single spherical mass, which is placed in a mould and then allowing to rest on a wooden "mastrello". Particularities of the processing are that the cheese is perforated with a thin rod of iron or wood to promote the draining of the whey, and then is then pressed into the wooden mould of wood. After a day, it is removed from the mould and placed on walnut. Two days later, the cheeses are dry-salted with coarse sea salt, and the salting varies from 20 to 30 days during the first 2 months. The cheese should be cleaned, rubbed and turned and from 3 months onwards treated with olive oil. A good Maiorchino is obtained after maturing for about 8 months.

The cheese has an amber yellow rind which becomes brownish with age and the interior is pale yellow with a compact texture. The flavour is delicate, becoming more spicy as it matures. It weighs about 10-12kg with a height of 12cm and a diameter of 35cm. Maturing takes place in underground stone buildings which are typical of the area. Cool and humid caves and cellars with wooden shelves are also used.