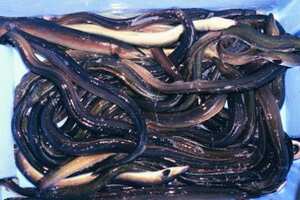 Lough Neagh Eel is a PGI eel from Northern Ireland.

âLough Neagh Eelâ is the name given to both yellow (known as brown locally) and silver (mature) wild eels of the species Anguilla anguilla (European eel) caught in the defined area. This application covers fresh eels only. Lough Neagh eels have the following characteristics:

â the flesh of the fresh eel once cooked is white, soft and fluffy with an earthy flavour

No feed is provided. The eels feed in the wild.

The eels must be caught in the defined area using the longline or draft net method on Lough Neagh or caught at fixed weirs from the mouth of the lough up the Lower River Bann. For processed products such as smoked eel, the geographical indication (Lough Neagh Eels) relates to the raw material, fresh Lough Neagh eels.

Lough Neagh in Northern Ireland and the Lower River Bann, from the northern shore of Lough Neagh to the Cutts at Coleraine.

Lough Neagh is the largest lake in the British Isles and is the fifth largest lake in Europe, covering 150 square miles. It is fed from a number of rivers and drains to the sea via the lower River Bann at the northern shore of the lough.

The large number of rivers coming into the lough result in high sediment deposits in the lough. These sediments are very dark and are composed of silts and clays, organic matter and diatom frustules. The silts and clays are primarily derived from river-borne suspended material whilst the organic matter originates partly from catchment sources and partly from material produced within the lake. Their nature and size makes them a suitable habitat for the multitude of invertebrate life, particularly Chironomid fly larvae which are known to dominate the benthic communities in the lake and which constitute the vast bulk of eel diet.

The lough is rich in nutrients (hypertrophic) and is continually aerated by circulating winds, which ensures that the enriched nature of the lake does not result in dramatic loss of oxygen in the warmer months.

Glass eels migrate from the Sargasso Sea northwards along the Gulf Stream across the Atlantic Ocean. They follow the North Atlantic Drift up towards Ireland. They reach the tidal reaches of the River Bann on the northern coast of Northern Ireland at Coleraine where they are either caught and moved in trucks, or swim upstream to Lough Neagh. Once they reach the lough they stop, feed and mature until they are ready to return to the Sargasso Sea to spawn. When fully grown, they cease feeding and instinctively return back towards their spawning grounds. The only direct route for the eels to return to the sea is the Lower River Bann.

Lough Neagh eels are caught in three different traditional ways, two different methods for the yellow eels and a third method for the silver eels

Fishermen set up to four nylon lines approximately 1 mile long with approximately 400 baited hooks attached to each line. These lines are then lifted in the early hours of the following morning. This involves bringing the line aboard by hand and storing any caught eels in barrels through which fresh water is pumped, to minimise mortality. The catch is returned to shore, where any eels under 16 inches (40 cm) in length will be returned to the lough, under the Lough Neagh Fishermanâs Co-operative Societyâs regulations, to ensure sustainable stocks for the future.

Manual drafting of nets up to 90 yards (82,3 m) long and 18 yards (16,5 m) deep. Hydraulic pot haulers are used to retrieve the ropes attached to the nets, but the net itself must be hauled in by hand, not towed by the boat. Trawling for eels is banned to protect the bed of the lough. Fishermen often rely on experience and an in-depth knowledge of the lough to locate the best catches under varying environmental and weather conditions. When brought ashore, the eels are graded and eels below 40 cm are returned to the lough as part of the sustainable management of the eel stock.

The silver eels are eels that have matured in Lough Neagh and are now instinctively beginning their migration northwards towards the coast and onwards to the Sargasso Sea to reproduce. Silver eels can only be caught from the 1 of June to the end of February. They are fished at fixed weirs at Toome (Toomebridge), at the exit of Lough Neagh on its northern shore, and Kilrea on the Lower River Bann, approximately 15 miles further north from Lough Neagh.

The silver eels only migrate under the cover of darkness and so they are captured at night by lowering large coghill nets into the river at the weirs. Each net is adjacent to a holding tank which sits in the river into which the captured eels are placed. These tanks can be raised and lowered to take account of the water level in the river depending on fluctuating rainfall.

The eels are then taken to the Co-operativeâs factory for grading and onward transportation, similarly to the yellow eels.

The European eel is listed in Annex II to CITES (Convention on International Trade of Endangered Species). In addition, Council Regulation (EC) No 1100/2007 establishing measures for the recovery of the stock of European eel proposes that Eel Management Plans should be put in place.

To ensure the sustainability of the European eel stock in the Neagh/Bann basin, an Eel Management Plan is in place which was developed and is operated in conjunction with the Lough Neagh Fishermanâs Co-operative Society. To maintain stocks, a number of measures are in place. These measures can only be practically managed through a licensing system, which is operated by the Society. There are no restrictions regarding who can apply for a licence. Membership of the society is not a prerequisite when applying for a licence, but if a licence is granted, then the fisherman may become a member of the Co-operative Society.

The Lough Neagh Fishermanâs Co-operative Society manages the sustainability of the eel fishery through a number of measures.

â Control of the issuing of licenses: the Co-operative issues approximately 180 licences each year. The licensed boat owner must be present in the boat at all times when fishing is taking place.

â Control of fishing methods: eel fishing can only take place using the longline or draft net process. The lines are subject to a maximum number of hooks. There is a limit set regarding the size of both the boat and the net.

â Catch quotas: a daily catch quota is set for each boat to ensure that the lough is not overfished.

â Operation of close season: fishing for both yellow and silver eels is restricted to certain times of the year to allow for replenishment of stocks.

â âTrap & truckâ operation: to assist the inward migration of elvers up the River Bann to Lough Neagh, many are caught at eel traps and transported in tanks to the lough to increase the number of elvers arriving in the lough each year.

â Traditional straw ropes: straw ropes are hand-made and laid on the elver passes to assist the elvers passage upstream to the lough. This increases the success rate for inward migration to the lough.

â Maintenance of a 'Queen's Gapâ at the silver eel weirs: a 10 % unfished gap (Queenâs Gap) is maintained at the eel weirs where the silver eels are caught to allow some of the stock to return to their mating grounds in the Sargasso Sea.

â Purchase of elvers from other areas to supplement natural recruitment to the stock: in recent years the natural migration of elvers to Lough Neagh has declined and so the Co-operative buys elvers from other areas which the mature in the lough. These elvers will then mature in the lough which gives them the distinct characteristics of Lough Neagh eels.

Lough Neagh eels have a reputation across Europe as a result of their high fat content (mature eels have approximately 23 % fat), which makes them ideal for smoking. Practically all of the eels from Lough Neagh are sold outside Ireland. Some make their way to Billingsgate in London, with the majority going to the Netherlands and Northern Germany, where they are smoked.

Lough Neagh eels feed primarily on the invertebrate larvae that is predominant in Lough Neagh. This type of feeding means that they have a narrower head when compared to eels from other regions that feed on fish.

The eels are caught using sustainable fishing techniques which ensure good management of the eel fishery.

The longstanding historical tradition and techniques used in the catching of eels in the specified geographical area forms the basis of the link to the geographical area. In addition, the application is based on Lough Neagh eelsâ reputation for having a higher fat content than eels from other areas. Lough Neagh is the largest freshwater lake in the British Isles which boasts many specific characteristics as described above which gives rise to a habitat which provides high value food contributing to the unique higher fat content from eels in Lough Neagh.

There is a longstanding historical tradition, with evidence that fishing for wild eels has taken place on Lough Neagh since the Bronze Age. The technique of catching eels in the specified geographical area has been longstanding and it is these methods that are still in use today.

The fishermen still use many of the traditional methods used by generations before them. They are caught using sustainable practices managed by the Lough Neagh Fishermanâs Co-operative Society. The practices adopted include the maintenance of a âQueens Gapâ which provides a 10 % gap at the eel weirs to enable the silver (mature) eels to return to mating grounds in the Sargasso Sea.

The importance and reputation of eel fishing in Lough Neagh is evident throughout history. Many poems have been written about the fishermen of the area and a number of superstitions have been held by the eel fishermen. More recently, a sculpture erected in the town of Toome showing eels swimming reflects the relevance the eel fishery has in local history and heritage of the area.