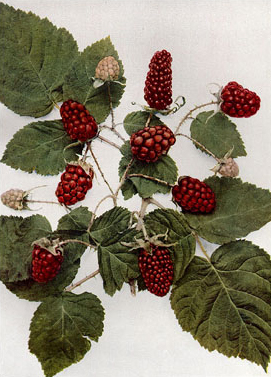 The loganberry is hybrid of the blackberry cultivar 'Aughinbaugh' (Rubus ursinus) by a red raspberry (Rubus idaeus). The plant and the fruit resemble the blackberry more than the raspberry, but the fruit color is a dark red, rather than black as in blackberries. Loganberries are cultivated commercially and by gardeners.

The hybrid was accidentally created in 1883 in Santa Cruz, California, by the American lawyer and horticulturist James Harvey Logan (1841–1928). Descendants from Logan's original plant were introduced to Europe in 1897. A prickle-free mutation of the Loganberry, the 'American Thornless', was developed in 1933.

Due to its high vitamin C content, the loganberry was used by the British navy at the beginning of the 20th century as a source of vitamin C to prevent sailors from getting scurvy much the same as the British did with limes during the late 18th century (hence the American term for the British, "limey"). During this period at the beginning of the 20th century, the largest proportion of loganberries grown for the British navy (roughly 1/3) were grown on a single farm in Leigh Sinton, near Malvern in Worcestershire, England, run by the Norbury family where Sir Edward Elgar taught the piano. The farm is still running today although hops replaced loganberries and since then cereal crops and oil-seed rape have replaced the hops.

Loganberries may be eaten fresh without preparation, or used for juice or in jams, pies, crumbles, fruit syrups, and country wines. In common with other blackberry/raspberry hybrids, loganberries can be used interchangeably with raspberries or blackberries in most recipes.

Loganberry is a popular beverage flavouring in western New York State and parts of southern Ontario. Loganberry drink (a sort of fruit punch) can be found on store shelves throughout the area, and several fast-food franchises sell it as well as milkshakes flavoured with loganberry syrup.

Loganberries are at their best and in season during the following months: July & August.