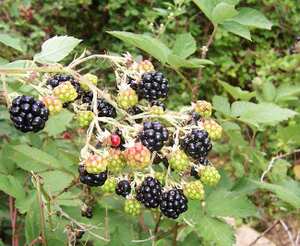 Though it is possible to buy commercially grown blackberries, the best way to obtain them is by "brambling" (picking wild blackberries). They are abundant in British hedgerows from the end of the summer until the beginning of autumn. Though superstition in the UK holds that blackberries should not be picked after Michaelmas (29 September) as the devil has claimed them, having left a mark on the leaves by urinating on them. There is some value behind this legend as after this date wetter and cooler weather often allows the fruit to become infected by various molds such as Botryotinia which give the fruit an unpleasant look.

The soft fruit is popular for use in desserts, jams, seedless jellies and sometimes wine. Since the many species form hybrids easily, there are many cultivars with more than one species in their ancestry.

Blackberries are at their best and in season during the following months: July, August, September & October.