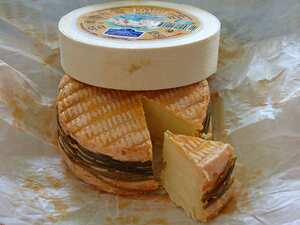 Livarot is an AOC and DOP cheese from the region of Basse-Normandie which is produced with cows’ milk.

It is a soft, pungent, washed rind cheese which both beloved and reviled for its strong aroma, often described as reminiscent of faeces or "barnyard."

The normal weight for a round of Livarot is 450 g, though it also comes in other weights. It is sold in cylindrical form with an orangey rind wrapped in 3 to 5 rings of dried bulrushes. For this reason, it has been referred to as 'colonel', as the rings of dried bulrush resemble the stripes on a Colonel's uniform. Sometimes green paper is also used. Its orange colour comes from different sources depending on the manufacturer, but is often annatto.

12% of Livarot is made from unpasteurised milk and it tastes better from May to September after maturing for 6 to 8 weeks, but it is also excellent from March to December.

If the Livarot cheese is not listed below, select a similar type of cheese from the list below to get a rough idea for the number of calories in Livarot cheese.