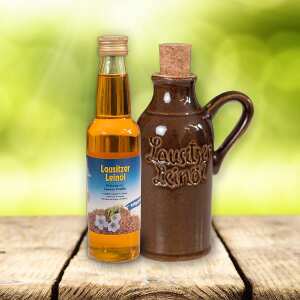 G.g.A. Lausitzer Leinöl is a natural and pure oil with a nutty flavour freshly pressed from linseed with a high percentage of polyunsaturated fatty acids with no additives

Method of production Lausitzer Leinöl is produced in Lausitz in the following stages;

Resultant bye-products such as oil from the last pressing and linseed cake expeller are separated and processed.

Gastronomy The G.g.A. Lausitzer Leinöl has a rather short preservation period and should be used within a month of its opening. To protect it from light and heat, it should be kept in bottles placed in a cool place, away from light, making sure to keep it in the refrigerator once opened. The G.g.A. Lausitzer Leinöl is used as raw seasoning on cheese of sheeps' milk and sprout salads, and in addition as basic ingredient in the preparation of various dishes, such as ricotta pie, onion pie, and obviously, roast potatoes.