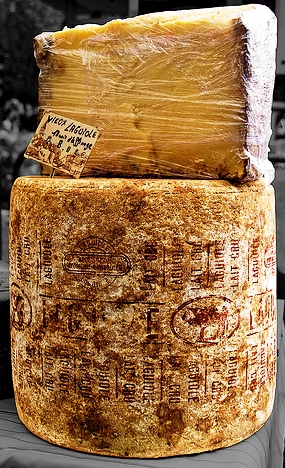 Laguiole aka Tome de Laguiole, is an AOP cheese from the plateau of Aubrac, situated at between 800 - 1500m, in the region of Aveyron in the southern part of France. It takes its name from the little village Laguiole and has been protected under the AOC since 1961 and by the amended decree in 1986. Laguiole is said to have been invented at a monastery in the mountains of Aubrac in the 19th century. According to historical accounts, the monks passed down the recipe for making this cheese from cattle during the alpages to the local buronniers, the owners of burons, or mountain huts.

Today, Laguiole is made in three different départements: Aveyron (Midi-Pyrénées), Cantal (Auvergne) and (Lozère Languedoc-Roussillon) by the coopérative Jeune Montagne. They are the only ones who are licensed to produce this cheese. With a 45% fat content, Laguiole has a pressed, uncooked interior made exclusively from unpasteurised French Simmental or Aubrac cows' milk collected between May and October at more than 800m altitude.

The Tome weighs 40-50kg and is distinguished by a bull sign and its name stamped on the rind, as well as by an aluminium identification plaque. Its production process starts with renneting before the curd is pressed in two consecutive stages. Maturing takes at least 6 months and may be as long as 12 months. The rind is natural and thick, the straw-coloured interior is supple and firm, and the texture rich and creamy.

If the Laguiole cheese is not listed below, select a similar type of cheese from the list below to get a rough idea for the number of calories in Laguiole cheese.