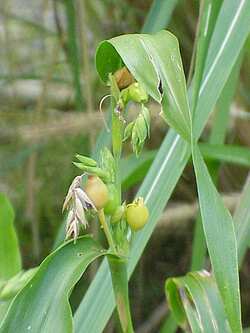 Job's Tears (Coix lacryma-jobi), Coixseed, adlay, or adlai, is a tall grain-bearing tropical plant of the family Poaceae (grass family) native to East Asia and peninsular Malaysia but elsewhere cultivated in gardens as an annual. It has been naturalised in the southern United States and the New World tropics. Job's Tears is also commonly, but misleadingly sold as Chinese pearl barley in Asian supermarkets, despite the fact that C. lacryma-jobi are not of the same genus as barley (Hordeum vulgare).

Job was a Biblical character who was an example of perseverance in suffering.