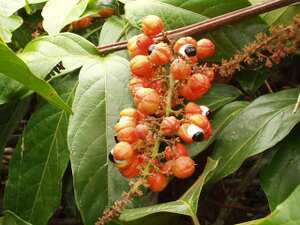 Guarana fruit - The 'eye of an Indian'

Guarana is a climbing plant in the Sapindaceae family, native to the Amazon basin and especially common in Brazil. Guarana features large leaves and clusters of flowers, and is best known for its fruit, which is about the size of a coffee berry. Each fruit harbours one seed which contains approximately five times as much caffeine as coffee beans.

Guarana is used in sweetened or carbonated soft drinks and energy shots, as an ingredient of herbal tea or in concentrated form in capsules. Generally, while South America obtains most of its caffeine from guarana, many other Western countries are beginning to witness the use of guarana in various energy and superfruit products.

Brazil, which is the third-largest consumer of soft drinks in the world, produces several soft drink brands from guarana extract. Exceeding Brazilian sales of cola drinks, guarana-containing beverages may cause jitters associated with drinking coffee.

Guarana is one of the growing superfruits.