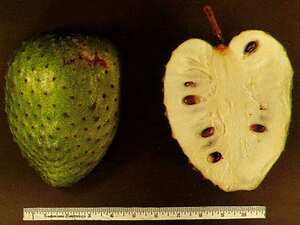 The soursop (Spanish guanábana, Portuguese graviola is a broadleaf flowering evergreen tree native to Mexico, Central America, the Caribbean and northern South America. Today, it is also grown in some areas of Southeast Asia. It is in the same genus as the cherimoya and the same family as the pawpaw. In most Spanish speaking countries it is commonly known as Guanábana. In the Philippines, it is known as guyabano.

Comparisons of its flavour range from strawberry and pineapple mixed together to sour citrus flavour notes contrasting with an underlying creamy roundness of flavour reminiscent of coconut or banana. The fruit is somewhat difficult to eat, as the white interior pulp is studded with many large seeds, and pockets of soft flesh are bounded by fibrous membranes. The soursop is therefore usually juiced rather than eaten directly.