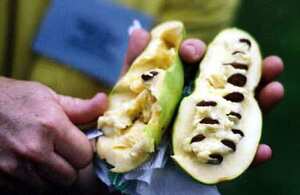 Pawpaw (Asimina) is a genus of eight or nine species of small trees with large leaves and fruit, native to eastern North America. The genus includes the largest edible fruit indigenous to the continent. They are understory trees found in deep fertile bottomland and hilly upland habitat. Pawpaw is in the same family (Annonaceae) as the custard-apple, cherimoya, sweetsop, ylang-ylang and soursop, and it is the only member of that family not confined to the tropics.

The fruit is a large edible berry, 5 to 16 cm long and 3 to 7 cm broad, weighing from 20 to 500 g, with numerous seeds. It is green when unripe, maturing to yellow or brown. It has a flavour somewhat similar to both banana and mango, varying significantly by cultivar, and has more protein than most fruits.