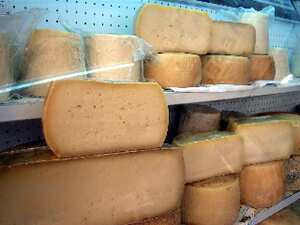 Graviera Agrafon is a ΠΟΠ (POP) hard table cheese produced traditionally and exclusively from sheeps’ milk or from a mixture of sheeps’ milk and goats’ milk.

The Agrafon area of the Karditsa prefecture. The cheese is made using traditional technology within the geographical area from the milk of sheep and goat breeds reared traditionally.

This cheese has been known for over a century. It is produced using traditional technology and ripened in installations within the defined geographical area.