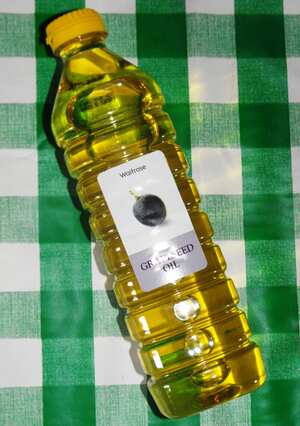 Grapeseed oil is extracted from grape seeds and has a relatively high smoke point, approximately 420 °F (216 °C), so it can be safely used to cook at high temperatures. It can be used for stir fries and sautéing. In addition to its high smoking point, it has other positive attributes in relation to cooking. It has a clean, light taste that has been described as 'nutty'. Because of its 'neutral' taste, the oil is often used as an ingredient in salad dressings or as a base for infusing or flavouring with garlic, rosemary, or other herbs or spices. It is also used as an ingredient in homemade mayonnaise. One is able to use less grapeseed oil for precisely the same reasons that the cosmetics industry likes it, the emollient and film-forming virtues.

The metabolic energy density of grapeseed oil is comparable to that of other oils, about 120 kcal per tablespoon (34 kJ/ml). However, the fact that less oil is needed for cooking may be useful when observing a low-fat diet. One should remember, though, that when using proper frying techniques (using enough oil, not overcrowding the pan, having the oil at the correct temperature), very little oil is absorbed. The oil contains vitamin E (0.8 to 1.2 g/kg), vitamin C and beta-carotene.