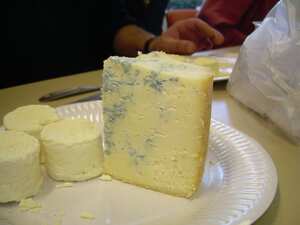 Fourme de Montbrison is an AOP cows’ milk cheese made in the regions of Rhône-Alpes and Auvergne in southern France. It derives its name from the village of Montbrison in the Loire department.

The word fourme is derived from the Latin word forma meaning "shape", the same root as the French word fromage is believed to have derived from.

The cheese is manufactured in tall cylindrical blocks weighing between 1.5 and 2 kg. The blocks are 13 cm in diameter and 19 cm tall, although the cheese is most frequently sold in shops in much shorter cylindrical slices. With a musty aroma, the cheese is extremely mild for a blue cheese and has a dry flavour.

Fourme de Montbrison has a characteristic orange-brown rind with a creamy-coloured interior, speckled with gentle streaks of blue mould. Its AOC status was granted in 1972 under a joint decree with Fourme d'Ambert , a similar blue cheese also from the same region. In 2002 the two cheeses received AOC status in their own right, recognising the differences in their manufacture.

The curd is salted and placed into a mould before being removed and placed on racks made from spruce wood. The cheese is then turned by hand, 90 degrees at a time, over a period of 12 hours. It is injected with penicillium roqueforti spores, and later injected with air to form interior pockets to encourage spore development.

The cheese must be aged for at least 28 days, though more often it is left for around 8 weeks. Around 20-25 litres of milk are used to make each cheese. By regulation the cheese may only be manufactured in any of 33 communes of the Monts du Forez in the départmentes of Puy-de-Dôme (Auvergne) and Loire (Rhône-Alpes).