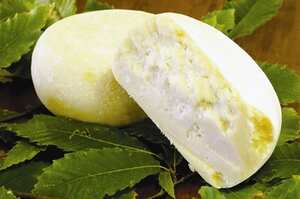 When placed on the market, the ‘Formaggio di Fossa di Sogliano’ DOP cheese has the following characteristics: the exterior of the finished product varies in colour from ivory white to amber yellow. At the end of the ageing process the weight of individual ‘Formaggio di Fossa di Sogliano’ cheeses varies from 500 grams to 1 900 grams. The cheeses are irregular in shape, with typical bumps and depressions, and the surface is primarily wet and greasy and in some cases may be covered by butterfat and mould which can be easily scraped off. Small cracks and possible yellow ochre stains of varying intensity on the surface are also typical of the product. There is no or minimal rind. The interior consistency is semi-hard and crumbles easily, and the colour is amber white or slightly yellowish. The smell is typical and lingering, and at times full and pungent, with aromas recalling woodland undergrowth with hints of mould and truffles.

The flavour varies, depending on the composition of the aged cheese, in accordance with the following characteristics:

There is little difference in the ‘Formaggio di Fossa di Sogliano’ cheese between the rind and the cheese itself and all of it can therefore be eaten without removing the outer part of the rind, although stains or butterfat may be scraped off if they are present. The fat content of the dry matter exceeds 32%.

The raw material for the production of ‘Formaggio di Fossa di Sogliano’ cheese consists of ewes’ or cows’ milk from herds located in the defined geographical area. The bovine species used to produce the milk are Italian Friesian, Alpine Brown, Italian Red Pied and cross-breeds; the ovine species are Sarda, Comisana, Massese, Vissana, Cornella White, Fabrianese, delle Langhe and Pinzirita and crossbreeds. The milk used comes from two daily milkings. Raw milk is used but the use of pasteurised milk is permitted. The use of additives is prohibited.

The animals may be housed or grazed. The basic feed for housed animals consists of fodder comprising grasses and legumes collected from monophyte, oligophyte and polyphite meadows in the regional territories indicated below, which because of the climate and soil properties determine the quality of the milk production. Grazed animals use the same fodder crops used for haymaking and spontaneous polyphite meadows which are rich in flora with grass, shrub and tree species. Green or hay fodder and grazing can be supplemented by straight feedingstuffs (a single type of grain) or compound feedingstuffs (several types of grain) with the possible addition of mineral/vitamin products. The feedingstuffs used to supplement the diet must not exceed 30 % of the total daily ration. The use of silage is not permitted.

The ‘Formaggio di Fossa di Sogliano’ cheese is packaged for distribution to preserve the characteristics of the product in accordance with the following packaging procedures:

‘Formaggio di Fossa di Sogliano’packaged in these ways may be contained in packs made of cloth sacking or wrapping or wooden or cardboard boxes. The operations of portioning for packaging must take place in the area indicated below since after the cheeses have been in the pit there is no clear distinction between the rind and the cheese itself as a result of the anaerobic fermentation which occurs during this stage of the processing, and the cheeses are wet and greasy and liable to become dry or hard. The product must therefore be packaged before commercial distribution in order to avoid the formation of cracks and fissures and to preserve the characteristics of the product.

The area of production of the ‘Formaggio di Fossa di Sogliano’ cheese lies on the slopes of ridges along the Apennines between the Romagna and Marche regions. The geomorphologic characteristics are clay and sand soils, sometimes alternating, resulting from the lower Pliocene and present Quaternary periods. At the cheese-pit sites, the holes are dug in a shape comprising a series of micaceous-feldspathic pits, generally with little cement, of yellow-brown or yellowish colour, in layers varying between 30–40 cm and about a metre thick, with thin alternating layers of grey and blue-grey shaley clay.

The application for the registration of ‘Formaggio di Fossa di Sogliano’ is justified by the unique features of its production, which are indissolubly linked to its specific geographic environment and climate and the very local tradition which has remained unchanging and unbroken over the centuries, and which has been handed down from generation to generation of cheese-pit operators who have retained the traditional knowledge and expertise. The tradition of ageing the cheese in pits began in the Middle Ages and it quickly became an integral part of country life in the territory between the Rubicon and Marecchia valleys and as far as the river Esino, overlapping the Romagna and Marche regions. The use of pits was naturally linked to the need to preserve the product, as well as to the desire to protect it from raids by the tribes and armies which over the centuries endeavoured to occupy the territory. The pits were dug out of the living sandstone rock and left rough. This activity became so common that it was eventually governed by precise regulations.

The first documents concerning the pits and the techniques for using them date back to the 14th century and come from the archives of the Malatesta family, the owners of the land. Some time after 1350 the Malatesta domain founded the Compagnia dell’Abbondanza within walled areas, estates and ‘tumbae’, farmhouses scattered throughout the territory. The pits were used to store, conceal and preserve cereals and various types of food and to age cheese, as a precaution against siege, epidemic or famine and to get round the severe terms of the contracts which governed tenant farms. Throughout the centuries the custom continued, unchanging and unbroken, in accordance with the rules laid down by the Malatesta.

The ‘Formaggio di Fossa di Sogliano’ cheese is different from other products in the same category for its typical and lingering smell, which is occasionally strong and is rich in flavours suggesting woodland undergrowth with hints of mould and truffles. These characteristics are closely linked to the method of production, in which ageing in pits is certainly a specific feature. Before the cheeses are placed in the pits, the latter are suitably prepared using the following method: when not in use the pits are kept closed by means of wooden covers with the addition of sand or rocks. When they are to be used, they are opened, aired and then sanitised by fire and smoke by burning small quantities of wheatstraw. When the fire is out, the pits are cleaned to ensure that no ash remains. A raised platform made of untreated wooden planks is placed at the bottom of each pit. This allows the fatty liquid produced during the fermentation of the cheese as it ages to drain away. The walls of the pit are lined with a layer of at least 10 cm of wheat-straw supported by vertical reed fencing. The pit is filled to the top with bags of cheese. After a period to allow settling, never more than ten days, more bags can be added to fill the pit. When the pit is full, the top is covered by uncoloured cloths suitable for use with foodstuffs, and/or straw, to prevent transpiration. The pit is then closed by means of a wooden cover which is sealed using plaster or lime sandstone mortar. Further covering using rocks, sandstone powder, sand and/or planks is permitted. This is when the ageing starts. The pits may not be opened during the ageing process. The cheeses remain in the pits from at least 80 to at most 100 days.