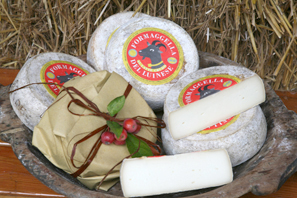 Formaggella del Luinese DOP is reserved for an Italian semi-hard cheese produced exclusively from whole, raw goat's milk, using rennet-based curdling, with a minimum maturing period of 20 days and the characteristics set out below.

The cheese has a medium-mild, delicate, pleasant flavour that becomes stronger as it matures. The aroma and fragrance are delicate and also become stronger with maturing. The cheese is supple, moist, soft and quite soluble. Its colour is uniform and mainly white.

Each stage in the production process is monitored, with all inputs and outputs being documented. This, along with the compilation of specific registers, managed by the inspection body, of breeders, producers and maturers, and timely notification to the inspection body of the quantities produced, ensures product traceability. Meadow, meadow/pasture and woodland plots must be entered in a register kept by the inspection body.

During the course of their activities, all parties involved in the production process must note, in dedicated registers, the quantity of incoming suitable milk and its origin, the quantity of suitable milk used to produce Formaggella del Luinese, the number of suitable cheeses produced, and the number of suitable cheeses hot-branded and labelled. All operators, whether legal or natural persons, entered in the relevant registers will be subject to checks by the inspection body.

The raw material used must be 100 % whole, raw goat's milk from the Camosciata delle Alpi, Nera di Verzasca and Saanen breeds (and their crosses), which are typical of the Alpine area. In addition to grazing, the diet of the herds, which remain at pasture for 7/8 months, is based on the use of hay fodder from local mixed meadows, supplemented with concentrates. During the grazing season, alongside the use of wild plants such as heather, spring prunings from hazel, ash and chestnut trees and wild herbs, the diet is supplemented with concentrates and, in some cases, hay fodder. During the period in stalls, hay fodder and concentrates are primarily used. The hay fodder is mainly obtained from areas on the valley floor where mixed meadows with species such as Dactylis glomerata, Poa pratensis, Poa trivialis, Avenula pubescens, Trifolium repens and Trifolium pratense predominate. The use of grass silage is not permitted.

Before being processed, the milk may be stored for a maximum of 30 hours at a temperature not exceeding + 4 °C. Then the inoculum and rennet are added. Only a natural or prepared inoculum, composed mainly of thermophilic lactic bacteria, may be used, with the possible addition of small doses of mesophilic strains. Only natural calf rennet may be used. Curdling occurs at 32 °C to 34 °C for a period of 30-40 minutes. The curds are broken only when the consistency has reached medium/high density. Breaking continues until a fine grain has been achieved, around the size of a grain of maize. Shaping takes place in 14 cm diameter moulds. These cheeses are drained for a maximum of 48 hours at room temperature, with the cheeses being turned 2-5 times during this period. salting may be carried out dry or in brine, followed by drying at room temperature. Maturing is carried out in stores with controlled humidity at 85-95 % and a maximum temperature of 15 °C or in cellars at ambient humidity and temperature. Maturing carries on for at least 20 days. As an alternative to steel or food-grade plastic, it is permitted to use copper boilers, cloth and shelves with wooden beams. Grids may not be used.

The territory in which Formaggella del Luinese is produced lies in the northern area of Varese Province better defined as the ‘Varese Alpine foothills’. The area's land is generally difficult to access, with a high percentage of woodland and pasture land. The age-old presence of activities whose success has been based around goat grazing has moulded the morphology of the entire area and altered its spontaneous development. The valley floor meadowland, which is close to rural population centres and provides winter fodder, the pastureland on the more accessible slopes where temporary shelters (known by the term ‘Casel’) have been built and the Alpine pastures at altitude demonstrate how the protection and use of the area's plant cover through herd grazing have been instrumental in determining their physical and functional structure and how, to this day, their maintenance depends on such activities. The network of ways and tracks, water points and watering places, the distribution of simple structures where herders and animals can rest or shelter and the distribution of the various plant communities continue to be determined, as far as their lay-out and distribution are concerned, by goat grazing. Two aspects of the climate primarily characterise this area. The first is the high rainfall, which is typical of the Alpine foothills.

The other characteristic element of the local climate is linked to the role of Lake Maggiore in regulating the temperature, which has the effect of mitigating extreme temperatures. These two factors act to produce an Alpine foothill climate, marked by abundant, well distributed rainfall and a low temperature range. A climate of this type, together with the acidic nature of the soils, strongly conditions the area's vegetation characteristics, in particular the natural development of the flora. The low level of human intervention in the areas has permitted, and continues to permit, the spread of the species that adapt best to these environmental conditions, such as purple moor-grass (Molinia caerulea), bracken (Pteridium aquilinum), common broom (Cytisus scoparius), heather (Calluna vulgaris), silver birch (Betula pendula), common beech (Fagus sylvatica), hazel, ash and chestnut. The herds' diet has traditionally been based on the use of these marginal plant communities dominated by shrubs and trees. Up to the present day, dietary practices are strongly marked by these plant species. In the more favourable areas on the valley floor, however, Arrhenatherion mixed meadows (with grasses and legume plants) predominate. These meadows are used for hay for feed.

As some studies have demonstrated, a proportion of the overall aromatic characteristics of the finished product derive directly from the plants ingested by the goats, since some of the typical aromatic molecules of the plant world are found in the cheese. This demonstrates the very close connection with the area in which the cheese is produced. Producers in the area are the custodians of an age-old culture and technique of milk processing that is expressed via unique instruments and technologies in a series of production methods that are very characteristic of the territory. Operators in the sector still have these abilities, which are typical of the heritage of skills and techniques that have developed in the geographical area, including through the creation of a wide and specific range of cheese-making instruments that can be considered typical of the area.

The long-standing techniques that are still practised in the production stages of Formaggella del Luinese include rapid rennet-based curdling (less than one hour) and breaking the curds to a fine grain. The utensils that were used historically and continue to be employed in the Formaggella del Luinese cheese-making tradition include the instruments used to break the curds, such as the ‘spino’ whisk (formerly made with a main wooden handle to which iron and copper wires were tired) and the cheese harp, as well as other processing instruments such as perforated ladles made from a mesh of interlaced grasses and small wooden moulds used to shape the cheeses.

Since time immemorial, goat rearing has traditionally been carried out by nuclear families for whom milk processing has been an important source of income. There is any amount of historical evidence, dating as far back as the 17th century, demonstrating that Formaggella del Luinese has always been part of the area's cheese-making and gastronomic tradition.