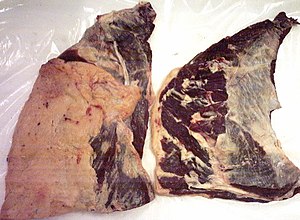 Raw flank steak / bavette steak. The steak on the right is missing the surface layer of fat. 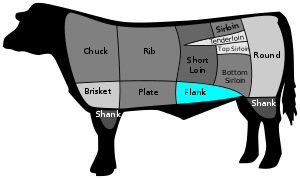 The flank steak is a beef steak cut from the abdominal muscles of the cow. A relatively long and flat cut, flank steak is used in a variety of dishes including London broil and as an alternative to the traditional skirt steak in fajitas. It can be grilled, pan fried, broiled, or braised for increased tenderness.

The cut is common in Colombia, where it is known as sobrebarriga, literally meaning "over the belly".

Flank steak is best when it has a bright red colour. Because it comes from a strong, well-exercised part of the cow, it is best sliced against the grain before serving, to maximise tenderness.

In the United Kingdom McDonald's uses "100% forequarter and flank" in its burger patties.

And to help you with Trivial Pursuits...

Lady Gaga wore a meat dress made of flank steak to the 2010 MTV Video Music Awards.

In the UK, Abel & Cole are a good supplier for bavette steaks. It can be delivered along with their vegetable boxes.

..and in their flowery words:

The beef bavette is one of the more unique cuts in more ways than one, as there is only one of these cuts in each bullock. It's also one of the best and more succulent cuts, which made us wonder why it wasn't better known. Until we were told that it's also called the Butcher's Cut, because butchers would keep it back from themselves as it tastes so good. Cheeky butchers.

Our high welfare beef comes from a handful of Yorkshire and Peak District farms, who love looking after their cattle. Richard Gill, for example, at Nether Rod Knowle Farm, on the edge of beautiful Chatsworth Park, is the third generation in his family to farm on this extensive grassland. Richard’s cows live longer, are better on their feet and turn the omega-rich grasses they nosh on into delicious meat.

Richard knows a thing or two about delicious meat. He’s appeared on television to tell the world all about it. “I was a guest on There’s No Taste Like Home, cooking up Great Grandma Jessie’s Sunday roast”. Definitely the roast with the most.