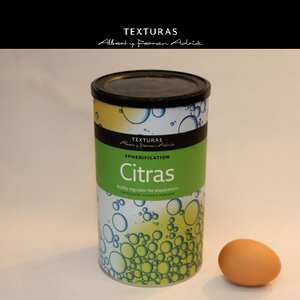 Some of the containers in the El Bullí texturas range are up to 600g - larger than you might first think!

El Bulli for you: restaurant sells its secrets to the masses, wrote Susie Mesure of The Independent back in 2007. This was to announce that the owners of the world famous restaurant Ferran and Albert Adrià were about to launch a range of food additives, derived from natural ingredients which they used in their own cuisine, to the catering trade in the UK. Fortunately the range, which was created by El Bullí Taller (their laboratory in Barcelona) is now available to the general public so that we can experience the delights of molecular gastronomy in our own homes. At present, the additives available are as follows:

Images of the El Bullí Texturas range of molecular ingredients