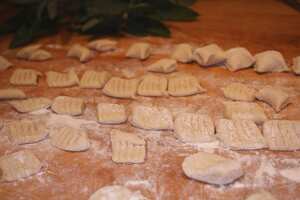 Gnocchi is the Italian name for a variety of thick, soft noodle or dumpling. They may be made from semolina, ordinary wheat flour, potato, bread crumbs, or other ingredients.

The word gnocco means "lump", and comes from nocchio, a knot in the wood. It's been a traditional Italian pasta type of probably Middle Eastern origin since Roman times. It was introduced by the Roman Legions during the enormous expansion of the empire into the countries of the European continent. In the past 2000 years each country developed its own specific type of small dumplings, with the ancient Gnocchi as their common ancestor. One variety, gnocchi di pane (literally bread noodles), is made from bread crumbs and is popular in Friuli and Trentino-Alto Adige/Südtirol. The use of potato is a relatively recent innovation, occurring after the introduction of the potato to Europe in the 16th century.

Gnocchi are eaten as entrées (primi piatti) in Italy or as alternatives to soups or pasta.