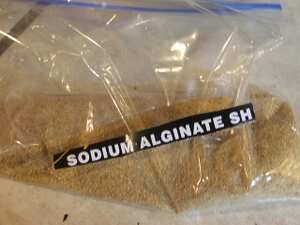 In molecular gastronomy sodium alginate (E401) is combined with calcium chloride and similar compounds to create spheres of liquid surrounded by a thin jelly membrane. It is produced from a wide variety of brown seaweeds of the phylum Phaeophyceae species and is used especially in the production of gel-like foods. For example, the red pepper stuffing in prepared cocktail olives is usually injected as a slurry at the same time that the stone is ejected; the slurry is subsequently set by immersing the olive in a solution of a calcium salt, which causes rapid gelation by electrostatic cross-linking. A similar process can be used to make "chunks" of everything from cat food through "reformed" ham or fish to "fruit" pieces for pies.