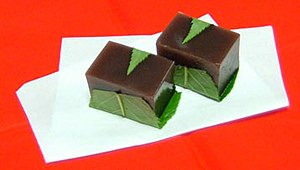 Mizuyōkan - a popular Japanese red bean jelly made from agar.

Agar or agar agar is a gelatinous substance derived from seaweed. Historically and in a modern context, it is chiefly used as an ingredient in desserts throughout Japan, but in the past century has found extensive use as a solid substrate to contain culture medium for microbiological work. The gelling agent is obtained from the cell membranes of some species of red algae.

Agar (agar agar) can be used as a laxative, a vegetarian gelatin substitute, a thickener for soups, in jellies, ice cream and Japanese desserts such as anmitsu. It can also be used as a clarifying agent in brewing in a similar way to isinglass.

In molecular gastronomy, it is used for the production of gels and foams.