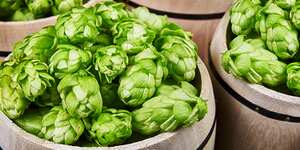 East Kent Goldings ’ is the name given to a unique variety of hops which are used in brewing the finest ales and beers. Cones form on the female plant of Humulus lupulus — also known as the ‘wolf of the woods’, the cone is made up of soft tissue ‘petals’ on the inside of which are the lupulin glands and they contain a sticky oily substance, known as lupulin, which contains essential oils and resins.

These cones are used primarily for brewing. They offer delicate floral aromas of lightly sweet lemon. The shape of the cone is long and oval measuring between 1,25 cm and 2,5 cm. The cone is rich green in colour with an inner surface of thin pale petals dusted with bright yellow lupulin which surrounds the base of the seed. The texture of the cone is sticky and oily at harvest, but once dried for preservation, it becomes crumbling pale petals with distinct yellow lupulin glands. The aroma is a mixture of citrus, lemon and floral overtones. The dry hop, when added to the final beer, provides a flavour likened to rich marmalade.

The major oil components of the lupulin are constant between seasons and localities and, as described, serve to distinguish the Goldings from all other varieties. However, the minor components of the essential oils can vary with environment and season and these compounds, mostly as yet uncharacterised, serve to distinguish the sensory perception of the aroma and flavour of cones of the Goldings grown in the East Kent region from the variety grown elsewhere.

‘East Kent Goldings’ are grown, picked, dried and packed into bales or pockets in the defined area. Production and preparation of ‘East Kent Goldings’ take place in the designated area. Although the ministry-certified planting materials (rootstocks or cuttings) are produced away from the designated area in order to maintain isolation to prevent ingress of virus diseases, the original source parent material originates in East Kent. It comes from the plant collections previously maintained at Wye College and East Malling Research Station (both respected scientific institutions), and now maintained by Wye Hops Ltd at Canterbury and Faversham. Documentation confirms the East Kent origins for this material.

‘East Kent Goldings’ are required to be packed into bales or pockets in the defined area. Packing compresses the dried hop cones which increases dramatically the bulk density to facilitate storage and transport. The process of packaging is required to take place directly on the farm where they are produced for identification and traceability purposes. Additionally, movement of hops in an unpackaged state would be difficult. These processes define the product as being ‘prepared’. The bales or pockets that contain the dried hops are labelled and sealed with the growers name, variety, parish or region, year of harvest and EU number before they are transported away from the farm for storage prior to delivery to the customer. The grower keeps a record of the field date of harvest and the bale or pocket numbers of the hops from that field.

The geographical area of production is bounded by the A249 road at Sheerness on the west, southbound to junction 7 of the M20 motorway to the south, then eastbound along the M20 to Folkestone. The north and east perimeters of the geographical area are determined by coastal boundaries. The area within these boundaries includes the parishes of Tonge, Borden, Lynsted, Norton, Teynham, Buckland, Stone, Ospringe, Faversham, Boughton-under-Blean, Selling, Chartham, Chilham, Harbledown, Canterbury, Bekesbourne, Bridge and Bishopsbourne.

The Golding was selected from the old Canterbury Whitebine variety by Mr Golding at West Malling, Kent in about 1790 (Percival, R.A.S.E Journal for 1901). By the early 1800s the Golding hop was being grown in East Kent where the soils were ‘best adapted to their growth (…) deep rich soils on calcareous subsoils’ (Rutley, R.A.S.E Journal for 1848). Grown in East Kent, it was considered to be superior to the Golding hops grown near Maidstone, commanding a higher price. To distinguish the produce from this area, it was sold as East Kent produce (‘The Hops Farmer’, E.J. Lance, 1838, London) thereby gaining the name ‘East Kent Goldings’. During the 19th century, several local variants, or clones, were selected in East Kent including Bramling (1865), Rodmersham or Mercers (1880), Cobbs (1881), Petham (1885), Early Bird (1887) and Eastwell (1889). Analysis of the essential oils confirms that all these variants of ‘East Kent Goldings’ have a consistent composition and are undoubtedly the same variety. Their plant morphology exactly matches the descriptions given by growers, agronomists and scientists for the Golding hop since the early 1800s.

Although hops are grown world-wide, they always perform best in the localities where they originate. This was the conclusion of an extensive series of international trials of hop varieties from 1960 through to 1978 (Neve, (1983) J. Inst. Brew, 89, 98-101). The main reason for this was considered to be the influence of location, giving a specific day length, on the date of flowering which was reflected in the yield obtained. Comparison of yields of Goldings grown in East Kent 2006-2009 confirms a consistent increase of at least 21 % over that obtained in other areas.

‘East Kent Goldings’ arose from a single seed. Hops are an out-breeding, highly heterogeneous, dioecious species. Thus, the breeding structure of the hop species is very similar to humans with separate sexes producing progeny each one of which is a unique individual. Although there may be family resemblances, no two individuals are the same genetically. Similarly, it is impossible for hops to self-pollinate and, necessarily, each new individual arises as the result of the recombination of the genes of two distinct parents. Each seedling develops into a mature plant which will differ from all other hop plants in terms of all its characteristics including morphology and chemical composition of its secondary products. A commercial variety is produced by clonal propagation from the unique original seedling plant by root division, runners (perennial shoots) or by softwood cuttings. Thus, every plant of a new variety is genetically identical to the original seedling because it has been produced by asexual means. Consequently, every plant can be used as the foundation stock for further propagation. The hop plant is a perennial root. A variety of hop can be a chance seedling e.g. Fuggle and Whitbread Golding variety or, more often, a result of a plant breeder. After the initial seed from the plant breeder which establishes the variety, the hop plants are propagated as clones from strap cuttings or mist propagated green shoots. The original rootstock can produce hops for many years, if kept free from disease.

‘East Kent Goldings’ are characterised by a high humulene content (with a ratio of humulene: caryophyllene always greater than 3) but very low farnesene and selinene contents, as described above. Because every hop variety originates from a unique seedling with a unique pattern of essential oils, it is possible to distinguish the oils of Goldings from other unrelated hop varieties such as Fuggle (which has much higher farnesene at ~ 7 %) and Challenger (which has much higher selinene at ~ 12 %). Although the pattern of major oils for ‘East Kent Goldings’ is similar to those of varieties related by pedigree, it is still possible to distinguish it. For example, its seedling Northern Brewer has higher myrcene content of ~ 36 % and Northdown (a seedling of Northern Brewer) has higher farnesene content at ~ 1,3 %. There is also much variety-specific variation in the post-selinene minor peaks.

Although the aroma and flavour produced in beers by the Golding variety is sought by many brewers, the contribution provided by Goldings grown in the East Kent region of England, the ‘East Kent Goldings’, is particularly prized. The specific combination of soils, aspect, day length, rainfall and temperatures in the region modify the growth and maturity of the variety to produce hop cones with a distinct sensory quality.

The deposits of deep alluvial brick earth found in the North Downs has a contributory factor to the uniqueness of ‘East Kent Goldings’. The soil is moisture retentive which is important as the effect of the Downs on rainfall in East Kent gives an average of around 635 mm per annum, some 76 % of the national average. This combination gives a lower humidity than other English hop growing districts. ‘East Kent Goldings’ flavour characteristics are influenced by the soil of East Kent — brick earth over chalk giving an ideal pH of 6,5-7,00 and by situation — exposed to cold salt laden winds off the Thames Estuary — particularly in March when the seasonal and varietal hop characteristics are established. Research at the former Wye College has demonstrated that lower soil temperatures during February and March are strongly correlated with higher yields in hops (Department of Hop Research Annual Report for 1980, Wye College) and that March temperatures can also be implicated in the bittering content of the resin in lupulin glands (Department of Hop Research Annual Report for 1982, Wye College). Furthermore, several of the precursors of compounds found in lupulin glands can be detected in bud and shoot tissues in March (Rossiter, Imperial College).

The delicate aroma of the ‘East Kent Goldings’ which is produced by this combination of regional factors is recognised and appreciated by brewers of fine ales and beers, both in the UK and USA. Brewers often use the words ‘East Kent Goldings’ on the labels of their containers. ‘East Kent Goldings’ regularly command a premium price for a unique raw material. They offer delicate floral aromas of lightly sweet lemon. The hops are supremely elegant but with a mineral quality which gives backbone and structure to the beers. Among award winning beers and ales produced using ‘East Kent Goldings’ are Fullers 1845, Hop Back Summer Lightning and Boston Brewing Co Ales from the USA.