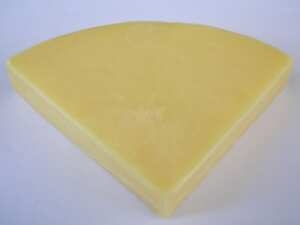 Dunlop is a mild cheese from Dunlop in East Ayrshire, Scotland. It resembles a soft Cheddar cheese in texture.

In the early 18th century Barbara Gilmour successfully manufactured a type of cheese till then unknown in Scotland, being made from whole milk from Ayrshire cows. Her process was copied by her neighbours and 'Dunlop cheese' came into such demand, that whether made by Barbara or her neighbours, or by the housewives of adjoining parishes, it found a ready market. It is suggested that the spread of the cheese to other districts was largely through farmers who had settled there from Dunlop parish. Even William Cobbett himself pronounced it 'equal in quality to any cheese from Cheshire, Gloucestershire, or Wiltshire.'

Barbara's system for making Dunlop was widely copied and extended rapidly to many parts of Scotland by the end of the 18th century, even where traditionally skimmed ewe’s milk cheese had been made.

The characteristics of Dunlop cheese is that it has a mild, sweet, buttery taste with a semi-soft texture when young but maturing to a fudgey or hard texture after a few months. The cheese is soft and tasteless when young, and takes from 6-12 months to mature. To acquire the light, elegant, charming flavour and fragrance peculiar to the Dunlop, it must be kept in a thoroughly dry place, and be frequently turned upside-down, as it undergoes a slight fermentation which heaves it a little on the top. One drawback of Dunlop cheese is that its nearest direct competitor, Cheddar cheese, being dry and hard, retains its weight while kept in stock.

The local Production of Dunlop Cheese ceased in around 1940, and has only been spasmodic since the Second World War, however Dunlop and other cheeses are now made at West Clerkland Farm just outside Stewarton on the Dunlop Road, and are also produced on the isles of Arran and Islay and elsewhere.

Ann Durward of West Clerkland produces just 3,000 - 5,000 kg per year and also makes a pasteurised version. The milk for the Dunlop cheese comes from her own herd. When Ann Durward attended the British Cheese Awards in 2001, Dunlop was awarded a Gold Medal.

If the Dunlop cheese is not listed below, select a similar type of cheese from the list below to get a rough idea for the number of calories in Dunlop cheese.