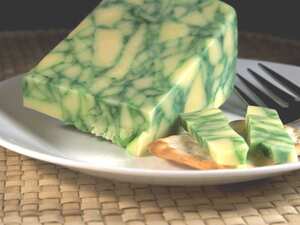 Derby is a mild, semi-hard cows' milk cheese but is usually made with a sage flavour and known as Sage Derby. The mottled-green colour is from mixing sage leaves in the curd before it is pressed or by the addition of "green curd" from green corn or spinach juice. In the latter case, the flavour has to be created with colourless sage extract. The sage gives the cheese an almost minty flavour. Parsley, spinach and marigold leaves, bruised and steeped before use, can also be included instead of the sage leaves.

The first production began in the 17th century and was only made for festive occasions such as harvest and Christmas. However, it is now available all year round.

If the Derby cheese is not listed below, select a similar type of cheese from the list below to get a rough idea for the number of calories in Derby cheese.