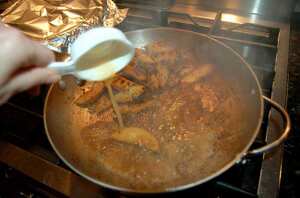 Deglazing the pan with cider

When a piece of meat is roasted, pan fried or prepared in a pan with another form of dry heat, a fond, or deposit is left at the bottom of the pan with any rendered fat. Usually, the meat is removed from the cooking vessel, the majority of the oil is poured off, leaving a small amount with the dried and caramelised meat juices. The pan is returned to the heat, and a liquid is added to act as a solvent. This liquid can be plain water, vegetable or meat stock, a spirit, some wine, verjuice or any other liquid. This allows the cook to scrape the dark spots from the bottom of the pan, and dissolve them creating a rich sauce.

This method is the cornerstone of many well known sauces and gravies. The resulting liquid can be seasoned and served on its own (sometimes called a jus), or with the addition of aromatic vegetables such as onions or shallots. The sauce can also be thickened with a starch such as flour, cornstarch, or arrowroot, or reduced with a steady heat forming a richer concentrated sauce.