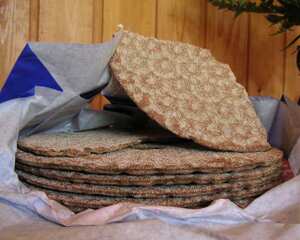 Some slices of knäckebröd

Today, however, much crisp bread contains wheat flour, spices and grains, and is often leavened with yeast or sourdough, and sesame seeds can be added.

Another method is to knead the dough under pressure in an extruder. The sudden drop in pressure then causes water to evaporate, creating bubbles in the dough.

Crisp bread is only baked for a few minutes, at temperatures usually between 200 and 250 °C.