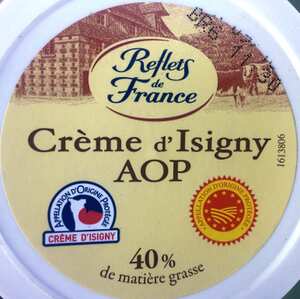 Geographical area : The Veys Bay and the valleys of the rivers running into it, i.e. 193 communes straddling the Manche and Calvados departments.

Evidence of origin : Stockbreeding in this area dates back to the 19th century, especially after the marshlands were reclaimed. The reputation of milk products made in the Isigny region (butter more so than cream for obvious preservation reasons) is certified in a large number of documents dating from that period. As early as the 1930s professionals requested protection for their milk products and a definition of the production area, but were not successful until 1986, when an Appellation d'Origine Contrôlée was granted.

Acquisition : The only treatment the cream receives is pasteurisation, which must be done no later than 36 hours after the milk is skimmed. It is forbidden to use colouring agents, antioxidants or anti-acid substances.

Link : The chalky-clay soil, the marine sediment environment, and the richness of the fluvial deposits make the Veys Bay and the surrounding valleys a special area whose high-quality grasslands give the milk a high concentration of trace elements and an exceptional mineral salt content. The conditions in which the cream is produced enable these special features to be reflected.

Gastronomy : AOP Crème d'Isigny should be kept in the refrigerator at a temperature of 4°C and should be consumed within 30 days. It is used in the preparation of various meat and fish dishes, quiches, salads as well as sweets. This product is also used to make Chantilly cream, which should be kept in the cold for at least 24 hours before consumption.