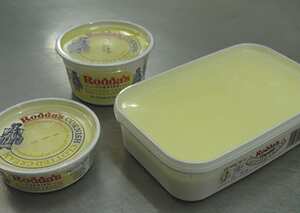 Cornish Clotted Cream is a PDO heat treated high-fat cows’ milk cream. During production, the product develops a characteristic nutty flavour and a consistency that is a mixture of thick and thin areas. It cannot be poured, but rather is usually rather spread, and it has little detectable smell. It has a surface crust which is golden in colour with a rough texture, whilst the underside is lighter in colour and both smooth and creamy in texture. The colour can vary between cream to a golden yellow depending on the breed of cow from which the milk was derived and the season of the year.

Cornish Clotted Cream is only made in the English county of Cornwall and all the milk used is produced in the county. Cornwall has an especially temperate climate which extends the grass growing season. The abundance of grass means that cows produce milk with the highest percentage butterfat content in England and Wales (an average 4.33% compared to 4.1%). A high level of carotene is also found in the grass which contributes the distinctive colour of Cornish Clotted Cream. It has a specific quality and reputation which is widely recognised as being attributable to the county of Cornwall.

Clotted cream has been made in Cornwall for many generations and it is noted in 17th century literature. Some historians claim that the idea of producing cream was brought to the country by the Phoenicians around 300 BC in return for the trade in tin. Its production certainly can be associated with the need to preserve milk produced on farms in the county where small herds of cows produced a relatively high volume of milk, high in fat, especially in the spring and summer months, thereby extending the life of the perishable raw product. At the turn of the century, visitors to Cornwall were introduced to Cornish Clotted Cream, and as a result of their enjoyment of the product, distribution began to London and other parts of the country. It is used for a variety of culinary purposes, but is best known as an accompaniment to scones and jam (often strawberry jam) as part of a cream tea, or as a topping for fruit and other desserts. Traditionally it was also used to accompany vegetables and was an integral part of the Cornish miners’ diet. Cornish Clotted Cream has been marketed for over 100 years. One producer has been making the product at the same site since 1890.

Cornish Clotted Cream is made throughout the year from fresh daily milk deliveries. Cows’ milk is warmed to enable the cream to be easily separated from the rest of the milk. Once separated, the cream's butterfat content is corrected by the addition of some of the milk previously skimmed off. The cream must have a minimum butterfat content of 55%, although the usual average is 60%. The cream is then heated (by a process known as scalding) to 70-80°C for a minimum of 1 hour, during which time a thick crust forms. It is not allowed to boil. The product is then cooled to a maximum temperature of 50°C during which time the crust hardens and the cream underneath thickens. The cream may be scalded in the pots used for retailing the product or transferred to another container.