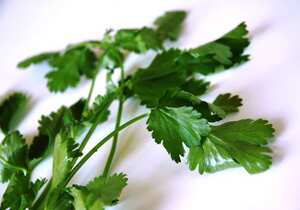 The leaves are variously referred to as coriander leaves in Britain; cilantro (from the Spanish name for the plant) in the United States, and dhania in the Indian subcontinent. The leaves, and especially the stems, have a very different taste from the seeds, similar to parsley but "juicier" and with citrus like overtones. Some people instead perceive an unpleasant "soapy" taste and/or a rank smell. This is believed to be a result of an enzyme that changes the way they taste coriander leaves, a genetic trait, but has yet to be fully researched.

The dry fruits are known as coriander seeds or coriander seeds. In some regions, the use of the word coriander in food preparation always refers to these seeds (as a spice), rather than to the plant itself. The seeds have a lemony citrus flavour when crushed, due to the presence of the terpenes linalool and pinene. It is also described as warm, nutty, spicy, and orange flavoured. They are usually dried but can be eaten green.