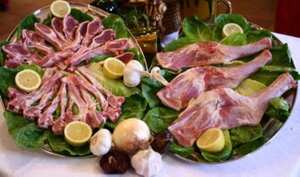 IGP Cordero Manchego is fresh meat of choice or top quality, of lamb of the Manchego breed, male or female animals (males uncastrated) reared for at least 30 days on their mother’s milk supplemented by white straw and authorised concentrates. Live weight on slaughter at the abattoir ranges from 22 to 28 kg, and the animals are aged from 60 to 90 days. Carcasses, weighing 10 to 14 kg, are long and slim, with a slightly rounded silhouette, and harmonious proportions; they are lean or slightly fat, the rump, back and haunches being covered with a thin layer of fine, creamy white fat, while the shoulder, leg and trapezium muscles are lean. The meat is pale pink, very tender and juicy, with incipient intramuscular fattiness imparting a characteristic, highly pleasant flavour.

Proof of origin: Manchego lambs born in registered holdings are identified on birth with a plastic ear tag on the left ear, which identifies the holding by means of two capital letters followed by the letters CM and the serial number shown in the birth records. They are rested at the abattoir for at least 12 hours prior to slaughter. After slaughter, the carcass classification committee, appointed by the Regulatory Council, determines which carcasses are eligible for the designation, and stamps them accordingly.

Method of production: Manchego lambs, identified from birth by means of an eartag, are slaughtered and handled in establishments registered with the Regulatory Council. The qualification committee selects animals for slaughter; animals are slaughtered, skinned and eviscerated in accordance with legally approved methods. Carcasses are kept in chambers at 3C to 4C for less than 24 hours, or at 1C to 3C for longer periods. They are never kept for more than six days.

Link: The area is characterised by a wide variety of topographical and landscape features, with a temperate Mediterranean climate and a wide range of temperatures. The Manchego breed is a native breed of sheep, that has been adapted to this region from time immemorial, and has been one of the main sources of wealth in the area. The breed is reared for milk, meat and wool, and constitutes the major form of exploitation of natural resources, flora and meadows, forage crops, fallow land, stubble and coppices; this varied diet and the special features of the breed provide meat that is particularly juicy, with a characteristic colour and flavour due to its geographical origin.

Gastronomy: IGP Cordero Manchego can be stored in the refrigerator for a few days, wrapped in a protective film and placed in the coldest compartment. It can be cooked in various ways and used in many recipes that call for its use. It is mainly used for roasted meat with the addition of few condiments in order to conserve the flavour and the extremely pleasant taste. It is perfect in unison with young wines with a fruity bouquet.