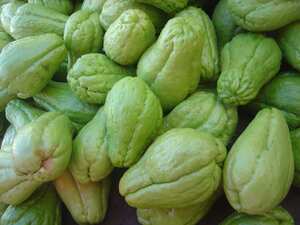 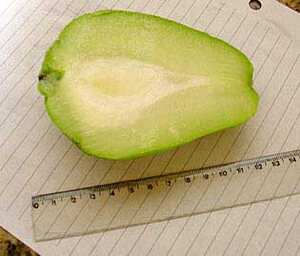 Chayote - sliced in half

The chayote, also known as sayote, tayota, choko, chocho, chow-chow, christophine or merliton, is an edible plant that belongs to the gourd family Cucurbitaceae along with melons, cucumbers and squashes.

Costa Rica is a major exporter of Chayotes worldwide. Costa Rican chayotes can be purchased in the European Union, the United States and other places in the world. Chayote is a very important ingredient in the Mexican diet. Veracruz state is the most important Chayote growing area of the whole country, and is also a major exporter of this product, mainly to the United States.

In the most common variety, the fruit is roughly pear or apple shaped, somewhat flattened and with coarse wrinkles, ranging from 10 to 20 cm in length. It has a thin green skin fused with the white flesh, and a single large flattened pip. The flesh has a fairly bland taste, and a texture described as a cross between a potato and a cucumber. Although generally discarded, the seed has a nutty flavour and may be eaten as part of the fruit.

Although most people are familiar only with the fruit, the root, stem, seeds, and leaves are all edible.

The fruit does not need to be peeled and can be eaten raw in salads. It can also be boiled, stuffed, mashed, baked, fried, or pickled. Both the fruit and the seed are rich in amino acids and vitamin C.

In Taiwan, chayotes are widely planted for their shoots, known as lóng xü cài (龍鬚菜, literally "dragon-whisker vegetable"). Along with the young leaves, the shoot is a commonly consumed vegetable in the region.