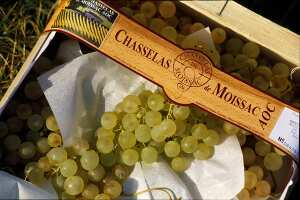 AOP Chasselas de Moissac are French table grapes in long regular bunches. The pips are golden and the pulp translucent.

Geographical area : The Bas Quercy, a number of cantons in the departments of Tarn-et-Garonne and Lot.

Evidence of origin : Production of table grapes developed in the 19th century when transport was modernized. Vineyards were re-established after being affected by phylloxera and the producers of chasselas grapes (the 'chasselatiers') pursued a policy of improvement and technical control of production. Their efforts were rewarded by recognition of a designation of origin by the Moissac civil court on 21 July 1953.

Acquisition : Chasselas grapes are produced on small areas of land in the geographical area (following current practice for the production of appellation contrôlée wines). The vine is trained, principally through the removal of leaves and surplus bunches, to produce the golden grape typical of the designation. Grapes are picked on several occasions.

Link : The Bas Quercy has its own individual geological, agricultural and climatic features. Production on small areas means that the grapes are grown on the most suitable soil: rich in silicon clay, sandy and well drained free of lime. The climatic conditions, with only slight variations in temperature and long fine spells in the autumn, are conducive to the ripening of the grapes.