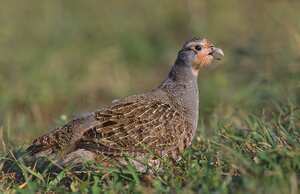 Partridges are birds in the pheasant family, Phasianidae. They are a non-migratory Old World group.

Partridges are medium-sized game birds, intermediate between the larger pheasants and the smaller quails. They are native to Europe, Asia, Africa, and the Middle East and are ground-nesting seed-eaters. They are 10-14 inches long and weigh less than one pound. They are a favourite game bird for many hunters. Usually, you would need to serve a whole bird per person.

There are two distinct species of partridges found in the UK. The original English grey partridge and the introduced French or red-legged partridge. The UK partridge season runs from the 1st September until 1st February.

Partridge is at its best and in season during the following months: October, November, December & January.