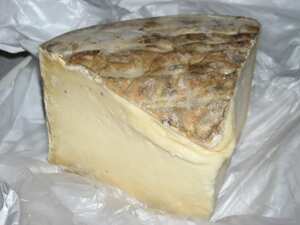 Single Gloucester cheese is a PDO cheese which can only be produced in Gloucestershire and whenever possible, the milk of the Gloucester breed of cow must be used. There are only 5 producers of the cheese, Charles Martell of Dymock being one of them.

Charles Martell's Single Gloucester is a full fat pasteurised cows’ milk hard cheese made with natural rennet. Softer and with a more open texture than most English hard cheeses. It is uncoloured and has a natural mouldy rind due to the high moisture content of the cheese. The cheeses are traditionally made thinner than a Double Gloucester, they also tend to have a lower fat content, hence ‘Single’ rather than ‘Double’ (as in single and double cream). A mild and slightly lactic flavoured cheese, it is eaten young, and goes well with a glass of perry. It makes an excellent toasting cheese. The cheese is wrapped in waxed paper. It is produced in 2 sizes: 2.25kg (21.5x7cm) and 700g (12x5cm).