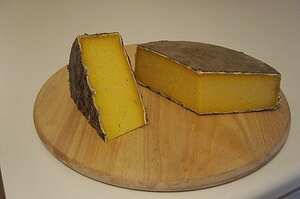 Double Gloucester is a traditional, whole milk, hard cheese which has been made in Gloucestershire since the 16th century although production in the county had died out by 1950. At one time the cheeses were made only with the milk from Gloucester cows, which became almost extinct, although Charles Martell uses the milk of his own herd of Gloucesters to make this cheese which was revived on his farm in Dymock in 1973. Many farmhouses can still be seen to-day with their louvered tallets, which is where the cheese was stored before being sold to the cheese merchants. These merchants would walk on the cheese to check that they weren’t ‘hoven’ or too soft.

The milk in Double Gloucester is taken from both morning and evening milkings giving it a rich, buttery taste and flaky texture. It is firm and bitable, buy not as firm as Cheddar and it has a mellow, nutty character with an orange-zest tang. The colour is pale orange, due to the addition of annatto. The milk can either be pasteurised or unpasteurised. The cheese has a natural rind and takes many months to mature. It weighs 2.5kg and has a diameter of 21.5cm and a height of 7cm and there is also a smaller cheese weighing 700g, with a diameter of 12cm and a height of 5cm. It is wrapped in waxed paper.

Charles Martell's Double Gloucester can be enjoyed as a snack, for grating or grilling.