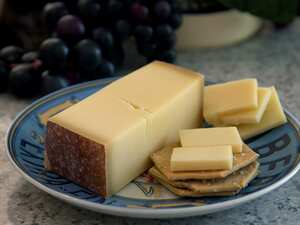 Allgäuer Bergkäse is a g.U. aromatic-piquant cheese (minimum dry matter: 62%) from unpasteurised cows’ milk. The rind-matured round is 8 to 10 cm high, weighs 15 to 50 kg and has a diameter of 40 to 90 cm. The rind is dark yellow to brownish. The malleable, dull yellow flesh had scattered pea-sized holes. Depending on age, the Allgäu mountain cheese has a mild to full-aromatic taste.

In the Allgäu region the production of mountain cheese has a long tradition. Initially, the cheese was produced on the summer Alpine pastures. With the expansion of house dairies around 1820 cheese making moved from the mountain pastures into the valleys, increasing in line with milk production in these areas. Thus by 1840 there were already important cheese dairies established in all parts of Oberallgäu.

Allgäu Bergkäse is produced from morning and evening milk. The evening milk is left standing overnight then skimmed in the morning and the morning milk added and mixed. Then the milk is warmed to 30 -32 °C with cultures and rennet added. Starting after about half an hour, the milk curdles and is then cut into pea to hazelnut sized curds. This preliminary cheese making stage lasts around 30 to 40 minutes. Afterwards, depending on the amount of milk and the degree of ripening, it is reheated over about ½ hour up to 50 °C then stirred for 20 to 40 minutes. Finally, the cheese is removed from the vat in a cloth and pressed over a whole day with an increasing pressure of from 5 to 8 kg per kg cheese, whereby it is also turned three times. On the following morning the cheese is immersed in a 20% brine bath for at least one day. Subsequently it is cellar-matured for two months at 16 °C during which time the cheese is washed with brine and turned two to three times per week. After maturing for a month at 12 °C the cheese has reached the correct maturity for consumption. Minimum age for Allgäu Bergkäse is four months.