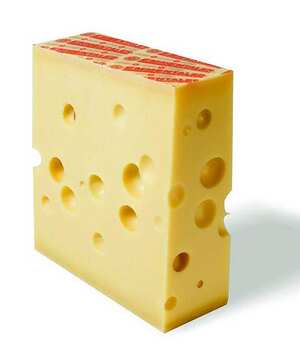 Allgäuer Emmentaler or Allgäu Emmental is a g.U. hard cheese (minimum dry matter: 62%) produced from unpasteurised cows’ milk and natural rennet. It is dull yellow in colour with a gold-yellow smooth rind. The cheese has cherry-sized holes spaced as regularly as possible. Its taste has an unmistakably nutty character. Weight should be between 40 and 130 kg. This cheese has no longer any particular shape and nowadays one can also find square and rectangular Emmental forms.

As the name indicates, the Emmental cheese is not originally from Allgäu but from Emmental in the Swiss canton of Bern. There, this cheese has been produced since the 18th century. In Allgäu, and especially on the summer Alpine pastures and on farms, a round hard cheese has been produced for centuries but with inconsistent results. But then the “Swiss method” was brought to the Allgäu for the first time in 1821 by Josef Aurel Stadler. It was he that brought two Swiss cheese makers or “Sennen“ to Weiler (west Allgäu) in order to produce their Emmental in that area although it was another six years before continuous production with fully matured cheese got underway in Gunzesrieder Tal. In the passage of time an increasing number of village cheese dairies then sprang up in Allgäu, although the technology was extremely simple. There, the milk was heated in cheese kettles over a fire, the temperature being measured with the elbow.

However, quality improved year by year and around 20 years after Josef Aurel Stadler first brought his Swiss cheese makers to Allgäu, many of the region’s dairies were able to produce high quality Emmental cheeses. The introduction of Swiss-type ripening cellars meant there was no longer any difference between the cheese produced in Allgäu and its Swiss forbearer. In this way the typical cherry-sized holes also became characteristic of the Allgäu Emmental cheese and marked the birth of the Allgäu Emmental. At the beginning of the 1920s the amount of milk produced increased strongly because of improvements in pasture-based farming. This led to co-operatives and private companies creating larger cheese production plants, which had the ability and capacity to process all the milk from a single village.

The milk is poured into so called cheese finishers lined with copper or steel (capacity:from around 5-12 tonne milk). The differing ripening of the morning and evening milk is balanced with the help of bacteria cultures. With the milk at 29-31° C a whey-rennet mixture is added. After around 30 minutes the milk coagulates. Subsequently the curds are cut and then further stirred while being heated to approx. 50-52°C whereby the curds are reduced to pea size. The curds settle on the bottom of the vat within a fine-mesh steel sieve basket, which allows the whey to escape. Subsequently the curds are then pressed with hydraulic-pneumatic presses for around one day with repeated turning.

Following this, the Allgäu Emmental cheese is put in a brine bath for two to three days to encourage rind formation. Afterwards the cheese undergoes preliminary storage at 8°C for around 4 weeks and then a further period of 4-5 weeks in a ripening cellar at a temperature of 20-23°C. Gases formed in this ripening cellar cause the famous holes in Emmental cheese. When this gas production eases off and stops, the cheese is then stored at around 8°C from 3 to an optimum 6 months. During this period the cheese is washed and salted at least twice a week to further encourage rind formation and to strengthen the taste