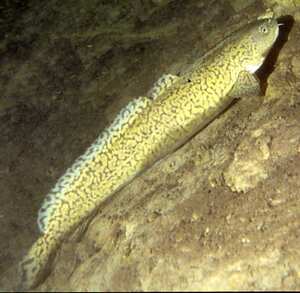 The burbot (Lota lota), often referred to as a "junkfish", is a freshwater fish related to the cods. It is also known as the lawyer, ling and (misleadingly) eelpout, and closely related to the common ling and the cusk. It is most common in streams and lakes of North America and Europe above 40°N latitude. They are fairly common in Lake Erie but are also found in the other Great Lakes.

In Britain, the burbot is possibly an extinct fish as it is believed that there have been no documented catches of the species since the 1970s. If the burbot does still survive in the UK, the counties of Cambridgeshire and Yorkshire (particularly the River Derwent or River Ouse) seem to be the strongest candidates for areas in which the species might yet continue to survive. There have been plans to re-introduce this freshwater member of the cod family back into British waters but these have yet to come to fruition.

In the 1920s, Minnesota druggist Theodore H. Rowell and his father, Joseph Rowell, a commercial fisherman on Lake of the Woods, were using the burbot as feed for the foxes on Joe’s blue fox farm. They discovered that the burbot contained something that improved the quality of the fox’s furs; this was confirmed by the fur buyers who commented that these furs were superior to other furs they were seeing. Ted felt it was something in the burbot, so he extracted some oil and sent it away to be assayed. The result of the assay was that the liver of the burbot is 3-4 times more potent in vitamin D, and 4–10 times more potent in vitamin A than “good grades” of cod liver oil. The vitamin content varies in Burbot from lake to lake, where their diet may have some variation. Additionally, the burbot liver makes up approximately 10% of the fish's total body weight, and their liver is six times larger than freshwater fish of comparable size. Ted also found in his research that the oil is lower in viscosity, and more rapidly digested and assimilated than most other fish liver oils. Ted went on to found the Burbot Liver Products Company which later became Rowell Laboratories, Inc., of Baudette, Minnesota, and is today a subsidiary of Solvay Pharmaceuticals of Brussels, Belgium.

The town of Walker, Minnesota, holds an International Eelpout Festival every winter on Leech Lake. In Finland, its roe is sold as caviar. There is an annual spearfishing tournament held near Dauphin, Manitoba, Canada. One of the highlights of the tournament is the fish-fry where the day's catch is served up deep-fried. It may be of interest to note that burbot meat when cooked tastes very similar to the American lobster (Homarus americanus). Hence, other times referred to as "poorman's lobster".