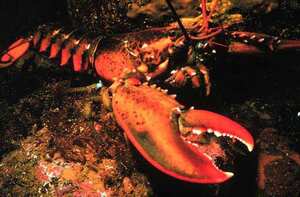 The American lobster, Homarus americanus, is one species of lobster found on the Atlantic coast of North America. Within North America, it is also known as the northern lobster, Atlantic lobster or Maine lobster. It thrives in cold, shallow waters where there are many rocks and other places to hide from predators and is both solitary and nocturnal. It feeds off of fish, small crustaceans, and mollusks.

The American lobster is found as far south as North Carolina, and are famously associated with the colder waters around the Canadian Maritimes, Newfoundland and Labrador, Massachusetts, New Hampshire, and Maine. They commonly range from 20 cm to 60 cm in length and ½ kg to 4 kg in weight, but have been known to reach lengths of well over 1 m and weigh as much as 20 kg or more, making this the heaviest marine crustacean in the world. An average adult is about 230 mm (9 inches) long and weighs 700 to 900 g (1½ to 2 pounds).

The adult American lobster's main natural predator is the codfish, but other enemies include haddock, flounder, and other lobsters. Overfishing of cod in the early 20th century has allowed the lobster population to grow enormously.