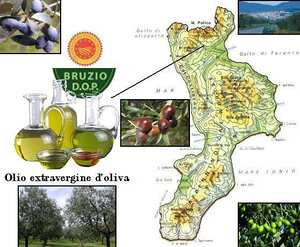 DOP Bruzio is an Italian extra virgin olive oil with the following chemical and organoleptic characteristics:

- Flavour: fruity. The above values vary, although within very strict limits, for each of the geographic at indications permitted under the production rules.

The growing of olives in this area goes back to 1000 B.C., and was introduced by the Greeks. Over the centuries it has expanded greatly, becoming a crop of considerable economic importance for the province. Because of its adaptability, the olive has made it possible to make use of vast areas of land little suited to raising other crops. The rising consumption of olive oil in the diet of the people of northern Italy has made it possible to -increase olive cultivation in the last century.

Bruzio extra virgin olive oil is produced from healthy olives with harvesting beginning when the fruits start to darken. The per hectare yield of olives may not exceed 10,000 kg in specialised olive-groves (i.e. land planted with olive trees on which no other crop is grown), with a maximum oil yield of 22%. The only extraction methods permitted are those physical and mechanical processes producing oil presenting the special original characteristics of the fruit as faithfully as possible.

Olive-growing is the area's main production sector. It has a leading role in the economy and contributes outstandingly to the area's productive capacity. Along with the groves of centuries-old trees, new specialised olive-groves have recently been planted in hill and plateau areas. Promoting the quality of the area's excellent production by means of a designation of origin is dictated by the need to give it adequate commercial prominence. Production is strongly marked by the presence of indigenous cultivars that have arisen over the centuries as a result of the particular exposure of the terrains and the soil and climatic environment. The variation in selection of these indigenous cultivars in the Cosenza province's cultivation zones, characterised as these are by differences of soil and climate accounted for by terrain exposure and composition, has made it necessary to provide in the production rules for the use of certain additional geographical indications in order to give greater geographical prominence to the production locations for Bruzio oil, which since it is substantially homogeneneous in quality would be unlikely to be assigned to these distinctive areas. They are Bruzio Fascia Prepollinica, Bruzio Valle Crati, Bruzio Colline Ioniche Presilane and Bruzio Sibaritide.