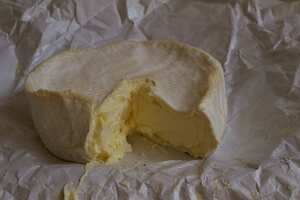 IGP Brillat-Savarin is a soft, white-rinded cows’ milk cheese which is named after the 18th century French gourmet and political figure Jean Anthelme Brillat-Savarin. The cheese was created in the 1930s by cheesemaker Henri Androuët.

The cheese is produced all year round, mainly in Normandy. It comes in wheels 12-13 cm in diameter and approximately 4 cm high. It is matured for one to two weeks and is also available as a fresh cheese that resembles rich cream cheese.

Brillat-Savarin is a triple cream Brie that is luscious, creamy and faintly sour. Because of its creaminess combined with its Brie aroma and slight sharpness, it has been described as "Dairylea for grownups".

The French cheese making company Rouzaire (Ile-de-France) also produces an older Brillat Savarin under the name Pierre Robert. The longer maturation period concentrates the proteins and salt in the cheese, resulting in deeper earthy flavours and a more intense salty taste. Wheels of Pierre Robert are physically smaller (due to loss of moisture), yet creamier than the usual Brillat Savarin.